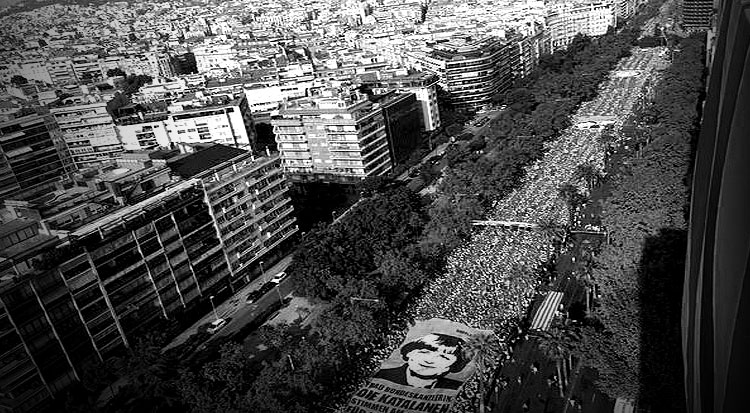 Catalonia´s National Day Diada 2014: from a marketing and communications perspective

A public event as massive as Catalonia´s National Day Diada 2014 with the participation of more than 1,800,000 people, is an event with multiple wins in logistics, communications and public relations. Assuming that was organized exclusively through internet with the help of hundreds of volunteers, it is worth seeing it with critic eyes from a marketing and communications perspective, so let´s get started...

Key elements for a successful event

Events are PR tools with many advantages but very tricky at the same time because we are completely exposed, and EVERYTHING in them communicates. The wide range of details involved is what makes them complex: a) a good host; b) attendance; c) adequate location; d) concept and clear objective that justifies it.

If you think about it, even though it´s a political event the Catalonia´s National Day Diada 2014 from a point of view of public relations and event management has fully complied with the main requirements for a successful event: Behind a great event there is a strong communication campaign

For an event to be successful it´s not enough to just invite people, have a nice place with good music and good food. It is essential to know how to communicate it. In order to do so, you need a strong communication campaign and launch it early enough to ensure a high participation rate, and to reinforce the event´s key message.

In the case of Catalonia´s National Day Diada 2014, the campaign "Ara es l'hora" which aired through online and offline communication channels, was created as the centerpiece of the event that led to a successful user registration, good logistics, high media coverage, Trending Topic creation on Twitter, and others. Let's look at the key points of the Diada 2014 from the point of view of communication and marketing:

An event however large or small will always have its challenges, especially when it is a public event. The Catalonia´s National Day Diada 2014 has a high merit level when it comes to communication and marketing. It gathered 1,800,000 people in the two main avenues of the city of Barcelona. But it wasn't only that, each attendee must be in a precise place with a certain color shirt before 05:14pm, the decisive moment when finally the "V" would be formed and the celebrations would be made. Organizing a big concert in a large stadium with the support and sponsorship of major brands requires a lot, but imagine the effort behind an event like the Diada 2014 with the only support of hundreds of volunteers and donations. The good mix of all these key elements created the opportunity to have some fun on that day and why not? Maybe even make history.